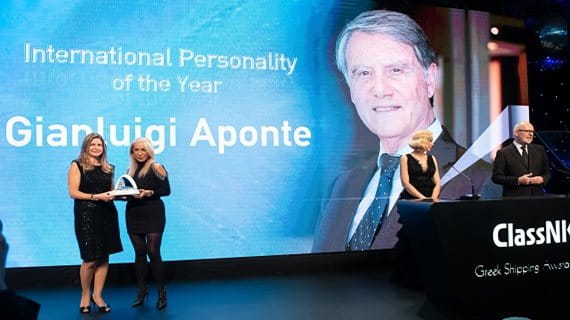 MSC is proud to announce that its Founder and Group Chairman, Gianluigi Aponte, was named winner of the International Shipping Personality of the Year Award at the annual Lloyd’s List Greek Shipping Awards.

The award recognizes his significant achievements during his 50 years in the industry and celebrates the special relationship that has been forged between the company and the Greek shipping industry over the decades.

In a joint statement, the awards judging panel commented: “The judges’ choice of International Personality this year leaves little room for disagreement. Gianluigi Aponte is renowned as one of the world’s foremost shipowners and his values have long commanded respect, not least among the Greek shipowning community."

The Lloyd's List Greek Shipping Awards has run in Athens since 2004 and has become an important annual event for the Greek shipping community and its partners. A prestigious and highly knowledgeable panel of judges from across the sector assessed all nominations and chose ‘the best of the best’ in a range of categories that spanned the full gamut of Greece’s shipping industry.

Starting out with a single general cargo vessel in 1970, Capt. Aponte has developed MSC with entrepreneurial spirit for five decades. His vision has brought growth in terms of both volume and fleet capacity, creating and nurturing a company that now serves customers all over the globe.